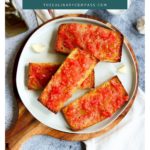 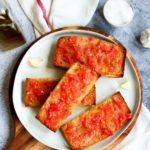 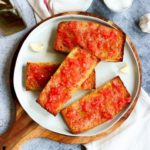 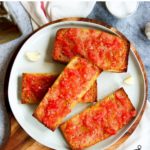 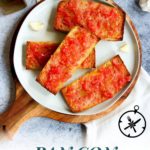 This Pan con Tomate recipe is only 5 ingredients, but it’s full of flavor. It comes together in a few minutes and will be a favorite appetizer as soon as you try it!

Pan con tomate or Pa amb tomàquet as it’s called in Catalan is a Spanish staple that you’ll love!

Tomato bread is often eaten as an appetizer, side dish, or even for breakfast. When I visited Spain, I was able to find it on every menu for every meal of the day which I definitely did not complain about.

I think it was both the first and last meal I had in Barcelona. Add some Iberian ham and *chefs kiss* you’re set.

The tapas were really one of my favorite parts of eating in Spain. Getting to try a bunch of different things each meal was right up my alley. I even made these Easy Shishito Peppers after eating my body weight in Padrón peppers.

What is pan con tomate?

Let’s start with the basics. Essentially it’s toasted bread with tomato, but also it’s so much more than that. The tomato mixture is usually grated making it into almost a paste that covers the bread. Use ripe tomatoes if you can!

I really like rubbing a raw, peeled garlic clove on the toasted bread to give it some flavor and spice. The tomato mixture sits on top of that with a drizzle of good quality olive oil and some flaky sea salt to finish it off.

It’s only 5 ingredients, but it’s full of flavor. It’s also great for just about any meal or as a substantial snack. I definitely had a half a loaf of bread on a few occasions.

What ingredients do I need?

You only need 5 ingredients! As long as what you have is good quality, that’s all you need. You’ll want to have the following on hand:

What kind of bread should I use?

Usually, a flat, crusty loaf called coca is used that is sliced and toasted. If you can find a baguette that is a little wider than a traditional French baguette, you’ll find that the slices hold up better.

I found that a loaf of ciabatta worked really well when you cut it lengthwise and then in long strips. Cutting it before baking allowed for more toasty edges which give it a really great crunch.

You can use a baking sheet or bake right on the racks of the oven to toast through!

How do I peel the tomatoes?

You can also just use a blender or food processor to make the mixture after you’ve peeled the tomatoes! I’ve done it by boiling the tomatoes – here’s a tutorial on how to remove the skin off of tomatoes if you don’t have a box grater.

Looking for other appetizers to enjoy? Try one of these: